Gwaii provided civil and environmental engineering services for this BC Housing project. The “Our House of Clans” project is a six-story residential/commercial building atop a concrete parade. The finished building will provide 34 dwelling units for Nation members as well as a community kitchen and ground floor commercial space.

Indigenous capacity-building efforts included engaging Indigenous subcontractors, employing a field technician selected from the community to work with both the civil engineer and the civil contractor, and providing training and job shadowing to interested community members. 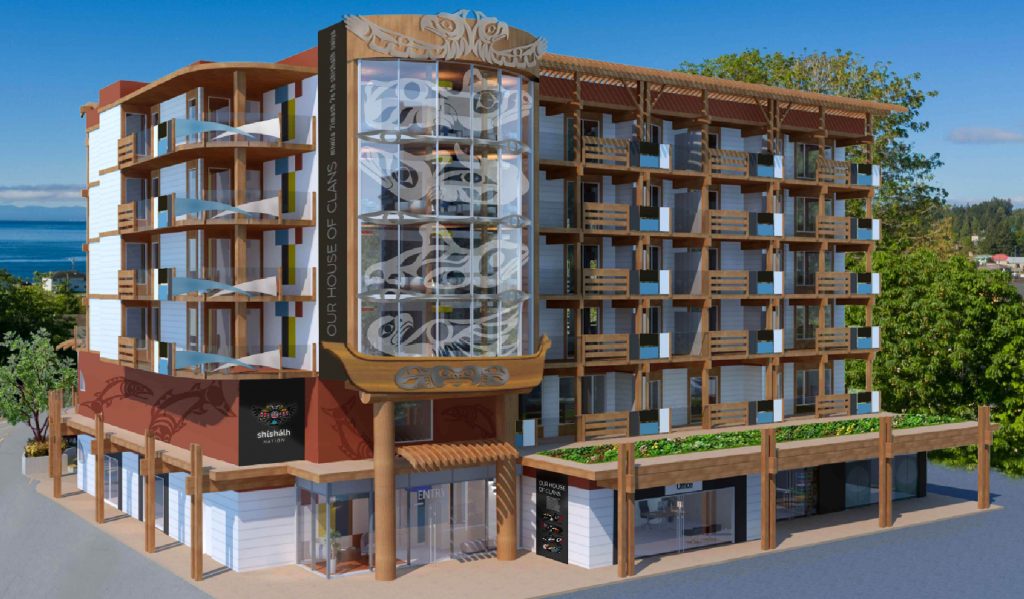 The Kel,Set (Reay) Creek Pond Remediation Project remediated contaminated soils that have been impacted by former industrial processes within the upgradient Transport Canada Site. Work under this contract included:

Design and construction of a creek bypass system to allow excavation within a dry creek bed. Excavation, transport and disposal of contaminated creek sediments. Restoration of creek bedding and reinstatement of the creek.

A Water Management Plan (WMP) was developed to provide an overall comprehensive strategy for the management of water during the draining of the creek, diversion of water around the excavation, management of seepage water within the work area, and reinstatement of the creek.

The Trent Force main project was part of the CRD’s Wastewater Treatment Project’s conveyance system and involved the installation of a 1.9 km pipe from the intersection of Chandler Avenue and St Charles Street in James Bay connecting to the Clover Point Pump Station. Gwaii worked with Jacob Bros and the CRD to develop an Environmental Protection Plan for the project and completed weekly environmental monitoring during the construction of the force main. Additionally, Gwaii’s scope of work involved the investigation of contaminated soils and the facilitation of disposal.
Gwaii was the prime consultant on the design and construction of the boat launch and Marina at Whaling Station Point. This is an ongoing (currently In Progress) project that in its first phase included comprehensive survey of the challenging topography, design of access and egress points and a strategically located round-a-bout. Additional design work included a Storm water management plan that incorporated raingardens, storm attenuation through controlled storage, and release into the ocean. Two significant parking areas were designed to handle both trailer and regular cars. Gwaii worked with the Nation on retaining and completing all required environmental studies and permits for construction within an intertidal zone.

After the Tsawout Nation lost their Longhouse in a devastating fire in 2009, rebuilding of their cultural home is underway. The new Big House will be a cultural gathering place, a home for the revitalization of cultural practices, a place for traditional teaching and learning, and a place for the revitalization of traditional social structures. This beautiful multi-purpose building is over 14,000 square feet and soars at a height of nearly 45 ft with its built-in smoke vent roofing. It is constructed of mass timber posts and trusses, which were partially assembled using traditional methods and sourced locally, adding to its sustainability.

The Longhouse is equipped with its own kitchen and includes a generously sized dining area, further upholding the Nation’s spirit of hosting meaningful gatherings. The building lot itself is perched 325 ft above sea level, offering spectacular views of the Cordova Channel and mountain ranges beyond. Furthermore, it uses a modern engineered design for stormwater management, via rain gardens and rock pits which minimize the impact of water runoff on the surrounding environment.

Gwaii’s scope of work: GWAII worked with the Nation to pull teams together and assisted with the funding applications to make the project more viable. GWAII is now overseeing the project management on their new ceremonial longhouse which is slated for completion later this year. Over the last 1.5 years, Gwaii has been on-site overseeing the site servicing and drainage works. Recently, Gwaii was asked to design a parking lot, access road, and rain garden to accompany the site.


For approximately 100 years, McLoughlin Point was the site of a bulk fuel /oil storage and transfer station. In 2017, construction for the new CRD Waste Water Treatment Plant at the site began and contamination in soils was identified during preliminary site excavations. GEL was retained by the general construction contractor to perform investigations and guide remediation with the goal of obtaining a Certificate of Compliance for the site ahead of the commissioning of the plant.